Dissemination and sustainability of CBITS rests on several factors, including program funding, community collaboration, and leadership support. Our Success Stories provide information about types of funding, models for dissemination, and examples of sites that have successfully sustained CBITS in schools.

Journey Mental Health Center in Dane County, Wisconsin has successfully implemented CBITS in local public schools since 2004. Originally funded by the Substance Abuse and Mental Health Services Administration, the program is now funded through the United Way of Dane County. United Way and the school system collaborators continue to support CBITS because of its evidence- and skill-based curriculum. CBITS has become a cornerstone in the overall plan for collaborative mental health screening and treatment of children in Dane County.

CBITS screens every sixth grader in the 18 participating middle schools in Dane County each fall. This helps school personnel provide the students with early and appropriate interventions and services including potential inclusion in the CBITS group. Feedback from the students, school personnel, and group facilitators has consistently shown that the exposure-based curriculum reduces symptoms, increases potential for positive school performance, and creates a forum for open communication with the students.  Journey Mental Health Center provides training, technical expertise, supervision, curriculum fidelity, and data collection in order to sustain CBITS in our community.

Since 2004, the University of Maryland has been implementing CBITS in schools throughout the state with great success. The Center for School Mental Health and the School Mental Health Program, both in the School of Medicine, initially received funding from the Maryland Department of Health and Mental Hygiene to implement CBITS in two Baltimore city schools as part of a trauma-informed framework for HIV prevention.

The program was received with such enthusiasm from participants and providers that the center has continued to provide annual trainings for their clinicians, who find the group format of CBITS to be a critical addition to individual services. They've also conducted trainings for school psychologists and mental health therapists, many of whom are actively implementing CBITS at the request of the Maryland State Department of Education and other government agencies.

School Mental Health, an office of the Los Angeles Unified School District, used a reflective learning group model (a weekly training and supervision process from preimplementation to outcome evaluation) to implement CBITS during 2008-2010. They trained 107 staff, offered 117 groups, and served more than 700 students in approximately 100 schools.

After treatment, 81% of CBITS participants across grade levels 5-10 reported improvement in post-traumatic stress disorder symptoms with 63% falling below clinical range. Students showed even greater improvement at the two- to four-month follow-up. Of the clinicians surveyed during the 2008-2009 school year, 98% said they felt comfortable implementing CBITS, were able to treat traumatized students effectively, and planned to use CBITS again.

CBITS is now an approved Evidenced-Based Intervention under the Prevention and Early Intervention component of California's Mental Health Services Act. The County of Los Angeles Department of Mental Health and many other counties have adopted it via their implementation plans.

Project Fleur-de-lis selected CBITS as the second tier of its three-tiered model of care. CBITS "was a natural choice given its proven efficacy with diverse populations and the relative ease of its dissemination and implementation." The program continues with funding from several sources, including Baptist Community Ministries and the Substance Abuse and Mental Health Services Administration. 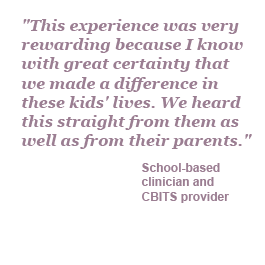 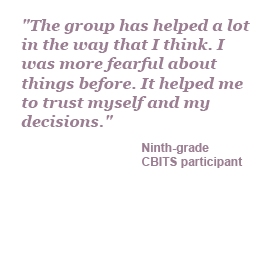